ROLLING ON THE FLOOR LAUGHING

ROLLING ON THE FLOOR LAUGHING

Written & Performed by Matthew Kelly & Richard Higgins as The Listies!

Hilarious, ridiculous fun for your kids that will have the whole family in stitches.

Back by Poopular demand! Join Rich and Matt for a comedy extravaganza jam packed with magically stupid stuff.

ROFL sees The Listies tackle the most terrifyingly tortuous family situation of all: BED TIME.  Rich, the exhausted parental proxy, is trying to get an early night while his hapless, hopeless housemate, Matt, deploys every trick in the book to stay up late.

Featuring toilet paper cannons, a real life Cowasaurus, lullabies of doom, detachable legs, a panoply of puns, and possibly too many Aldi gags.

This show will have you Rolling On The Floor Laughing.

Gratuitous, ridiculous, hilarious, joyous and possibly hazardous, Rich and Matt are The Listies, Australia’s maestros of kidult comedy, a multi-award winning duo who win over everyone who comes to see them with their insane, interactive, illogical and irreverent escapades.

As seen on ABC TV.

The Listies have played in venues right around Australia far too numerous to list here!

If tickets are not on sale yet at your selected venue the links below will take you to their What’s On page.

What people are saying

★★★★½ “The result is an hour of rambunctious fun so clever, and so perfectly attuned to its audience, it wouldn’t surprise me if The Listies became the first children’s comedy act to win top gong at the Comedy Festival.” The Age, 2019

★★★★★ “Forget about the night-time stand-up comedy and just go see The Listies doing ‘kidult’ comedy in their riotous and ridiculous new show… Just buy a family pass…. It’s bloody worth it!” Kate Herbert (reviewer for The Herald Sun, 2021)

“No-one else does comedy for kids this brilliantly, and what’s more the adults have just as much fun!” Sydney Morning Herald

“The only downside of seeing The Listies is that kids may be disappointed the next time they go to the theatre because it isn’t always this awesomely excellent.” Sometimes Melbourne

“When I saw The Listies, it affected my thinking because I really related to the comedy craft they were exercising…it got me a little bit excited to realise that when you are performing for kids, it’s just as delicate and just as sophisticated.” – Frank Woodley, The Australian.

“If the Wiggles are the Eagles then the Listies are the Sex Pistols.” — Dave O’Neil ,The Age.

“Australian duo the Listies have conquered children’s comedy through deep respect for their audience, with a focus on the subversion of the adult desire for control — with hilarious results.” — Sue Giles, The Australian.

Matthew Kelly and Richard Higgins are The Listies, a Kidult comedy duo who produce LOLS on screen, stage and the page.

Rich and Matt met way back in the dinosaur times (in the early aughties), performing in kids theatre shows by the likes of Andy Griffiths and Roald Dahl in shows like: Just Disgusting, The Day My Bum went Psycho and The Twits. Rich played Mr Twit and Matt played Mrs Twit. (There they are in the photo to the right.) They were directed by a kids theatre genius called Lynne Ellis.

Millions of years passed, ices ages came and went. And then one day they thought they should make a comedy show together and put it in the Melbourne Fringe. Rich wrote a title on his hand and registered them for 5 shows.

Influenced by classic comedy duos like Los Trio Ringbarkus, Lano and Woodley, Morecombe and Wise, Terrance and Phillip, Spongebob and Patrick, Tim and Eric, French and Saunders, they made an absurdist, double act show for adults all about lists. It was called The List Operators.

It won them Melbourne Comedy Festival’s coveted Golden Gibbo award for best independent show. They toured it for a year and then in 2009 they made a show for KIDULTS (kids and their adults) called The List Operators for Kids: More Fun than a Wii!. Even though it was a very, very long title it was the first kids show ever to be nominated for the Melbourne Comedy Festival ‘Barry’ (best show) award. Rich and Matt toured Wii for two years. And shortened their name, in order to be able to fit it on a rubber stamp, becoming The Listies in 2010.

Since then Matt and Rich have had enormous fun performing to lovely people all over the world. They’ve played high-flying, glamorous locations like London, Sydney Opera House, Kuala Lumpur, South Korea, Edinburgh and even Woolongong.

And they made a bunch more shows: The Listies Do Compooters, Earworms, 6D (Twice as Good as 3D), The Listies Make U LOL, The Listies Ruin Xmas, Hamlet Prince of Skidmark (co-created with and directed by Declan Greene) recorded two comedy albums, Drive U Crazy! and Go Bananas and have written two books with Penguin, Ickypedia: A Dictionary of Disgusting New Words, and it’s sequel Ickyfoodia: The Ultimate Guide to Disgusting Food in 2017.

Right now they are based in Melbourne Australia where they’ve been coming with great new gags for their new TV series on ABC and ABC iVIEW. They are also thinking of having a fart extractor installed in their secret batcave as Matt has been eating too many lentils…

THE LISTIES MAKE YOU LOL

Alien attacks, toilet paper guns, spew, the rudest word in the world and the most disgusting pair of undies you have ever seen in your entire life. Raucous, unruly hour and guaranteed to have the whole family (even dads) LOLing, ROFLing and ROFLSHALBOWCOing.* Don’t miss it!

A seriously silly show that answers all of life’s unimportant questions, like: how do you take a smellfie? What does pooetry sound like? How does one avoid a fartquake? Anarchic, spontaneous and funny, Ickypedia is for kids of all ages.

An uproarious take on the holiday panto. Its mission? To make families laugh as much as possible in 55 minutes.

Watch the trailer and the new music video N.A.W.T.Y. 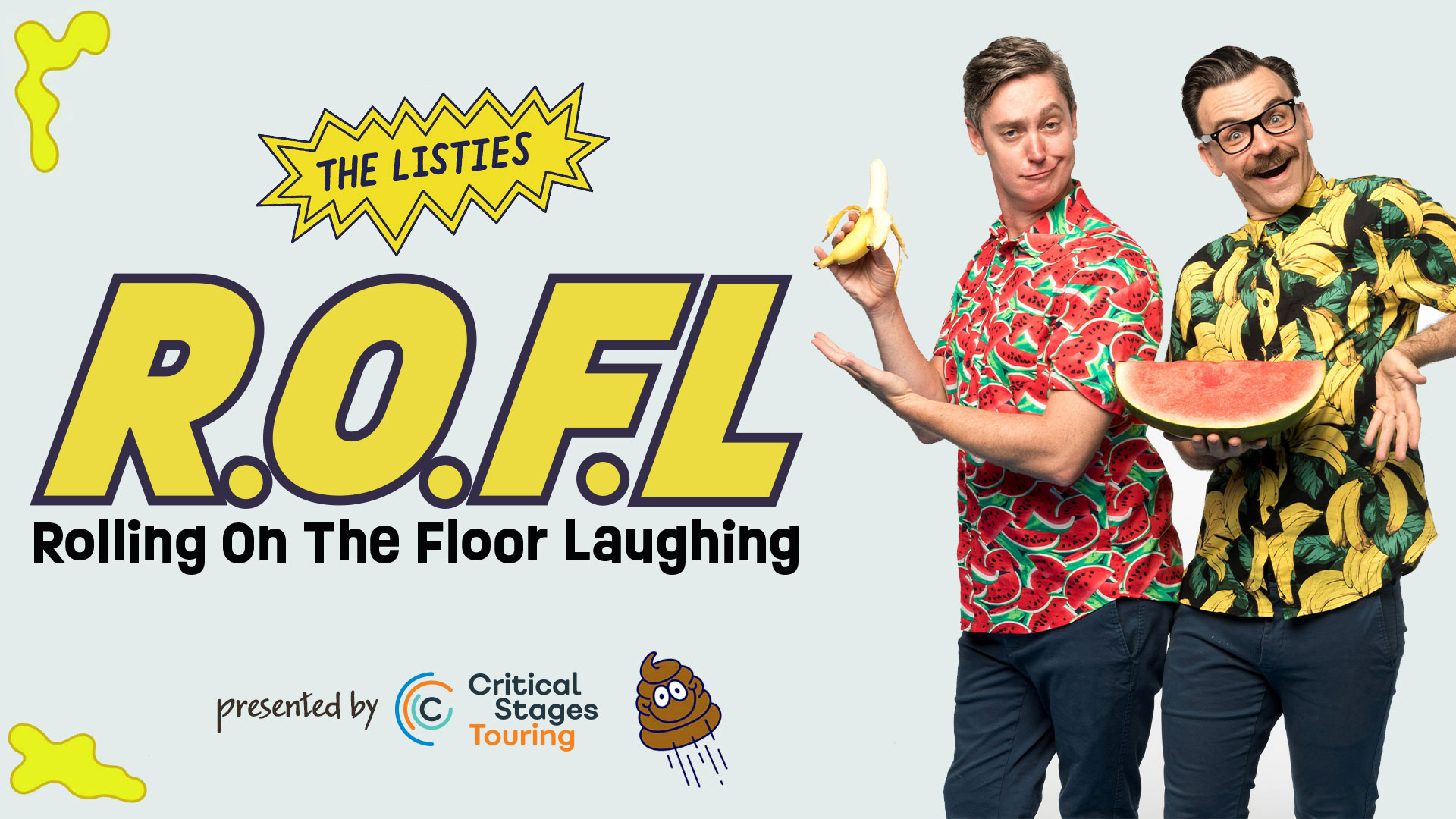