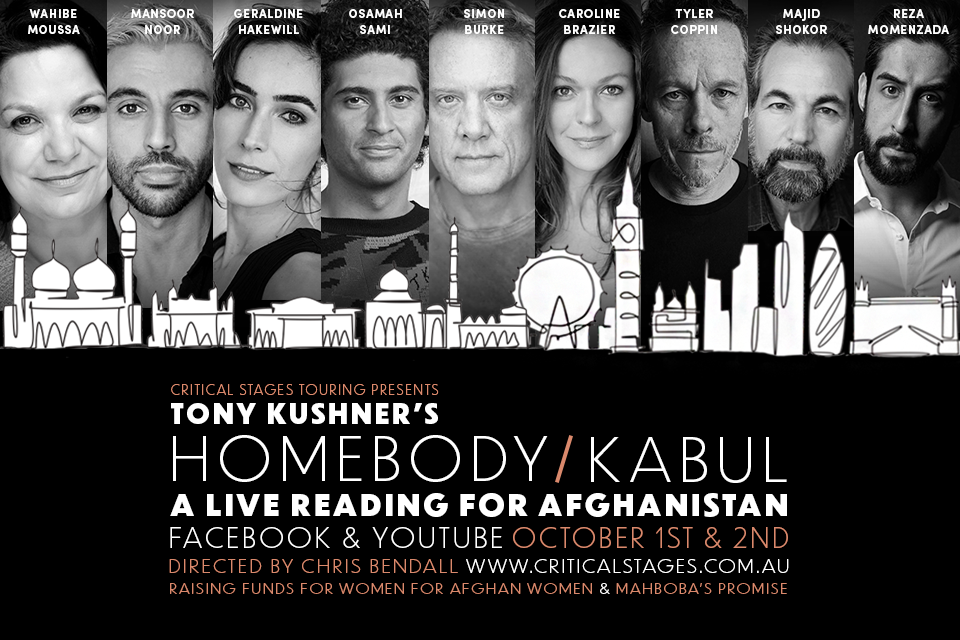 Presented over two nights this rehearsed reading will be raising funds to support two charities providing life-saving community support and programs in Afghanistan – the NY/Kabul-based Women for Afghan Women and Australian-based Mahboba’s Promise.

The two 100-minute livestreams will be broadcast live on Friday 1st and Saturday 2nd October at 7pm Sydney time, via our Facebook page and YouTube channel. Viewers will be asked to donate to each charity directly in lieu of buying ‘tickets’ to the event, which will not be recorded or stay on either platform after the performance.

Kushner’s Homebody/Kabul is the story of a lonely London housewife and the far-reaching effects of her fascination with Afghanistan, set off by an outdated guidebook. Set in 1998, and written before “September 11” and “Taliban” became part of our vocabulary, the story begins with a thrilling monologue from the Homebody, played by Caroline Brazier (Rake, Packed to the Rafters). After the Homebody disappears into Afghanistan, her husband and daughter desperately search for her, becoming ever more ensnared in a culture ripped apart by centuries of turmoil.

Chris Bendall initiated the project after the most recent events in Afghanisatan. “Re-reading it recently I was struck by Tony Kushner’s remarkable dexterity of language, his wit, and the hope that he offers – that through knowledge we might gain a greater understanding of the world we live in.” he said, “Kushner has extraordinary skill creating drama at the intersection of the personal and the political. In this vast, moving and often richly comic play, he creates complex characters searching for connection, and yearning to be understood, against the backdrop of Afghanistan under Taliban rule. It was a work that turned out to be eerily prescient when it premiered in 2001, and now 20 years on has only gained in resonance and relevance.”

The current crisis in Afghanistan has forced nearly 400,000 Afghans to flee their homes, towns, and provinces seeking safer refuge. The team at Critical Stages Touring reached out to the arts community to find a way to support on-the-ground services for the most vulnerable.

Women for Afghan Women (WAW) is the largest women’s rights organization in Afghanistan. Based in New York and Kabul, they rescue and defend women who are survivors of violence, including helping them escape the Taliban. WAW has improved the lives of over 1.36 million women, children, and their families, with a presence in every province in Afghanistan.

Mahboba’s Promise was founded by Mahboba Rawi, an Afghan refugee and now an Australian citizen, who has experienced first-hand the effects of a country torn apart by years of war and civil unrest. With Mahboba’s intimate knowledge of Afghanistan, Mahboba’s Promise was able to respond effectively and flexibly, to directly meet the needs of the country’s orphans and widows. Since then, Mahboba’s Promise has established schools, shelters and health clinics across Afghanistan and provided numerous sponsorships to widows and orphans in need. Mahboba’s Promise is currently running an emergency appeal to raise funds to supply shelter, food, water and other necessities to 500 displaced families in a camp outside of Kabul.

Readers should follow Critical Stages Touring on YouTube, or visit the event on Facebook to be in the audience. You can also register for a reminder via Eventbrite with the option to donate today.

ABOUT WOMEN FOR AFGHAN WOMEN

Women for Afghan Women (WAW) is the largest women’s rights organization in Afghanistan and the only culturally competent organization serving Afghans (and other immigrants) in the NY area. We rescue and defend women who are survivors of violence, including helping them escape the Taliban. We also conduct culture change work to gain and advance women’s rights in all levels of society. We have now improved the lives of 1.6 million women, children, and families through our programs in Afghanistan and our NY Community Centre. WAW has 32 centres and programs that reach all 34 provinces in Afghanistan.

Currently, WAW have staff and teams on the ground in Kabul and other cities who are working hard to provide direct support and assistance to our clients and other staff. As reported by most news outlets, banks and shops in Kabul and other major Afghan cities are closed at the moment, but that doesn’t deter us from our mission. We are using our available resources at the moment to ensure that our clients and staff have what they need until they can be moved to safety.

Mahboba’s Promise is an Australian non-profit organisation dedicated to helping disadvantaged women and children in Afghanistan. Mahboba’s Promise was founded by Mahboba Rawi, an Afghan refugee and now an Australian citizen, who has experienced first-hand the effects of a country torn apart by years of war and civil unrest.

Its mission is to provide effective overseas development aid to disadvantaged women, widows, children and orphans. We will achieve this through sustainable development programs destined to be operated by local authorities and communities. Over the past 25 years, Mahboba’s Promise has established schools, shelters and health clinics across Afghanistan and provided numerous sponsorships to widows and orphans in need.